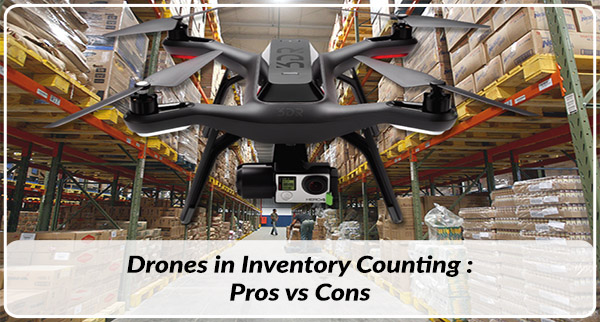 We can all imagine drones moving boxes in the distribution center. However, there are a couple of reasons that make it difficult to move boxes today. That being said, another scenario offers even a more compelling advantage: inventory control. Of course, a few technological hurdles need to be overcome for this idea to be really feasible. Today, the payload for a drone is limited. To increase the payload, the drones need more motors and propellers, which increases the size of the drone significantly.

This size increase also its battery efficiency. After installing this many propellers and battery, the flight time on the drone might only be 15 to 20 minutes with a payload of maximum 10 to 15 pounds. In order to keep the drones operating, there have to be recharging stations where the drones have to be sent every 15 minutes. Again fast charging technology will help here, but that technology is not fully ready yet. 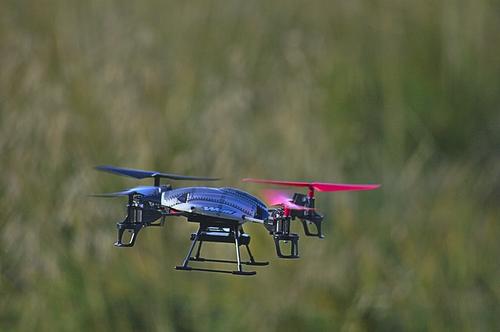 So this significantly reduces the feasibility of drone deployment, except in distribution centers that move small items. Electronic components might be one example. Also small electronics products, including smart watches or fitness trackers. Of course, all these in E-commerce customer order fulfillment scenarios.

The first approach is using radio-frequency identification (RFID tags).  In this scenario, each unit of every SKU would need an RFID tags in it and then also the locations that hold them (any type of location, such as pallet reserve, case reserve, case pick, active, etc.). The drone would take a flight path that covers all the locations, which would mean that the drone would have to fly at different altitudes to cover all levels of racking and then read the tags that are in that vicinity including the parent RFID tags associated with the locations.

Further, the methodology followed for counting would need to be slightly different because of the use of RFID tags for counting. The distribution center needs to be divided into zones and inventory needs to be associated to the zone and then compared on a weekly basis or a daily basis at this zone level rather than counting at the bin level. This approach is slightly different compared to the most popular warehouse management systems (WMS) that are used today, which count the inventory at the bin or at location level.

The second approach would be to scan the warehouse locations using a camera and then convert the images into inventory count. This approach would work for pallet reserve, single SKU case reserve and even for case pick locations. It would not work for active locations because the units within the active location need to be moved around during counting to see all the units. This means the number of tiers for a pallet and the number of cases within a tier will need to be established at the item master level and also the pallets and cases will have to be built following those standards. Also the algorithm needs to be sophisticated to translate the rectangular boxes that appear in the images to actual box count.

In Command Wearable is one another technology that can be integrated with the drones. this ruggedized consumer electronic device for use in enterprise environments as an alternative to the rugged wearable computers like Motorola WT4000 and Honeywell LXE HX2. In Command Wearable has a consumer electronic device, a proprietary ergonomic rugged enclosure, and intuitive set of apps to enable the consumer device to be used in warehouse and distribution environments. The first generation of In Command Wearable uses Apple iPod Touch 5 as the core-computing device paired with a Bluetooth ring scanner for data capture. By integrating In Command devices with drones the computation of inventory from images can be done more easily leveraging the sophisticated cameras.

Let us know in the comments section below if you see any opportunities for drone deployment in your distribution center.