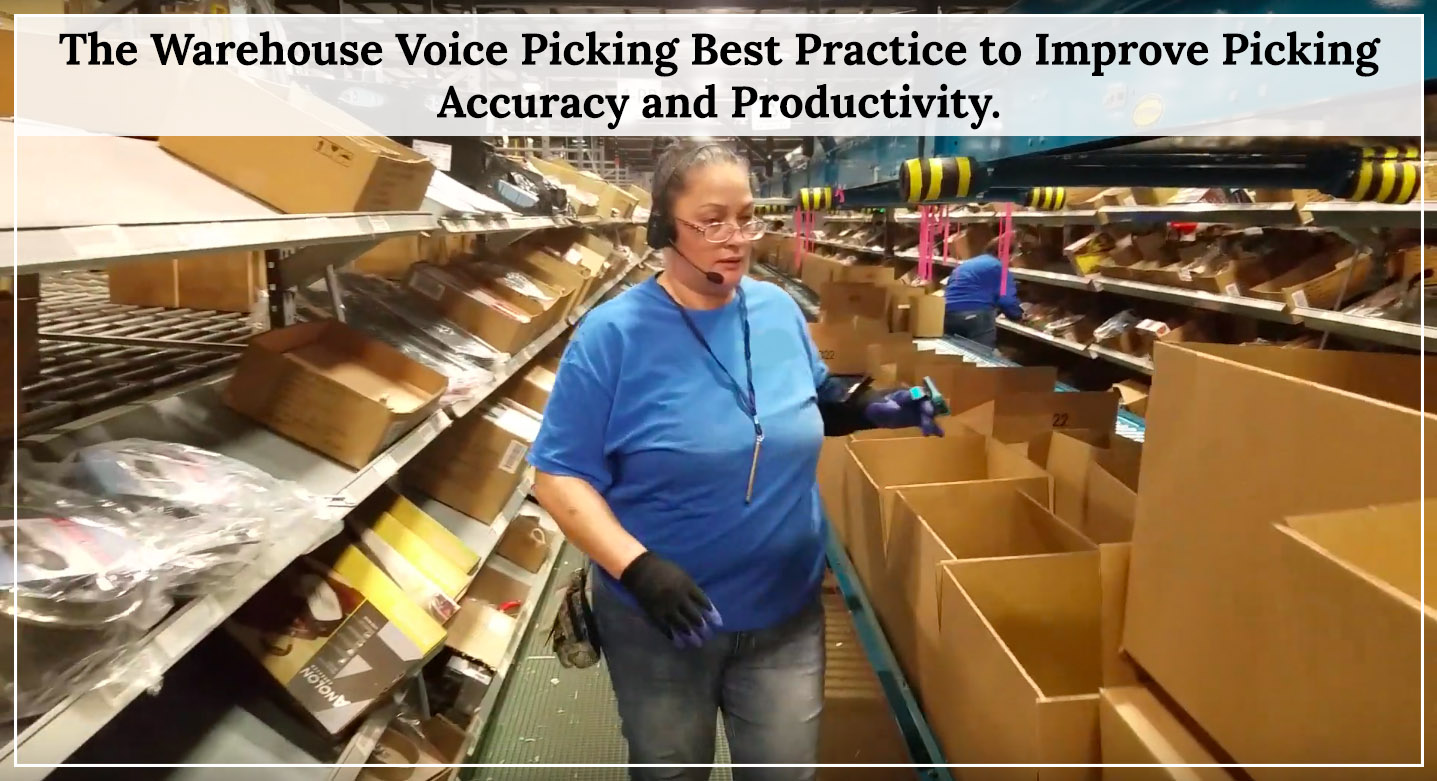 This best practice is on warehouse voice picking. Instead of looking at the screen and looking at the device and typing in the characters and picking you would talk hands-free and eyes-free with voice-picking. This is what the voice picking is, but let’s take a step back and understand how this whole picking process is evolved. If you look at it, the very first picking process was all based on the paper pick takers. There was some kind of a picking document or label that was printed and given it to the picker and the picker would go to the SKU location and pick two units or 10 units.

This was the paper based picking process and the advantage is it was super fast. They picked it fast and they came-back and did some kind of verification against the order and then they packed it. But the problem with paper picking was a lot of mis-picks. Operators did not pay attention on what they picked. It would be a wrong SKU, wrong location, and especially newbies did not fully understand until some time. The next came in the RF handheld picking, which implemented a connection with the WMS. They made small screens that would run on these RF handheld devices and the users picked using the RF handhelds.

The problem with this is the users need to constantly keep it down while doing their picking and then back up going to the next location. These scan guns originally designed for retail and not designed considering the warehouse perspective. With these scan guns accuracy got significantly improved. Every single pick is verified against the system. It had the ability to scan the SKU, scan the location, which means that if the SKU is wrong or if the location is wrong the system is going to immediately tell the user, that it is wrong location, wrong SKU, so they would pick from the right location and right SKU.

So they would scan all that and and validate the picks then and there. The accuracy significantly improved and the mis-picks got eliminated, but the speed significantly reduced. Then next came our wearable solution. Warehouse operators wore the wearable devices and then picked. Using the wearable device unit was great. As it is hands-free they are not constantly keeping it down and picking it back up still they were looking at the screen and then doing it.

Voice picking was the next step in the evolution. It means hands-free and eyes-free operations are now possible. It is simple as wearing a headset and talking to a computer through the headset and then there is a voice-recognition engine that runs on this computer. A voice engine recognizes the commands that are given and then it translates that and send it to the WMS. There is a lot of integration work involved and then still majority of the technologies used are proprietary technology which is very expensive.

If you look at the technologies that are coming out of these mobile devices especially Google voice, it’s amazing and all the older technology required choir. It required the operators to record their templates, which means that before they start newly they would spend one hour or two hours, and record their template for certain commands and then the system would recognize based on the matching the sound wave file, that was recorded for this operator versus the file in the system. That’s how it worked and that was great because there was no possibility of doing voice picking.

This technology provided some viability of using voice picking and I still remember one of my earliest voice picking clients which were a food distributor. Their margin was so low and they wanted to take advantage of this opportunity and they improved their picking speed, accuracy, and reduced mis-picks, eliminated shortages. But in the long run it was expensive to maintain as it was an old proprietary specialized technology. At the present times when comparing Google voice and Apple Siri, to some extent Google voice is much better than Apple Siri because there are a lot of machine learning and AI that goes behind the scenes.

It does not require any template recording before and also it recognizes when the mood changes or the voice slightly changes. For eg. if the person catches cold the voice slightly changes and it works for that scenario and also when the person’s mood changes, sometimes when the warehouse workers get frustrated in operations and if they are tired for the day, their voice changes a little bit and the proprietary voice system struggles to figure that out, whereas the Google voice, does a great job.

So, it is always better use voice products based on the Google voice. This is the evolution of voice-picking technology and now it’s hands-free which means that you can do whatever you want with your hands and eye-free. You don’t have to constantly look at the screen. You can talk to the computer and do your job and depending on the product and depending on the size of the product, product portability, you could get a significant efficiency gain. That’s something to take a look at with the voice picking and indeed some companies have walked out of the voice technology. With Google voice you could accomplish all that at a much lower cost and it’s kind of a plug n play technology, and as a matter of fact we are turning it on for one of our customers. The future is all about machine learning, AI, and all that is going to hit the supply chain. Put in your comments in the section below and thanks for your time.

Originally published at Smartgladiator.com on September 17, 2019.

11 Ways to Avoid Retail Chargebacks in Your Supply Chain

The 9 Best Practices to Ship Your Products without Any Damages to Retailers and avoid retail chargebacks, freight claims, damage claims and rejected loads