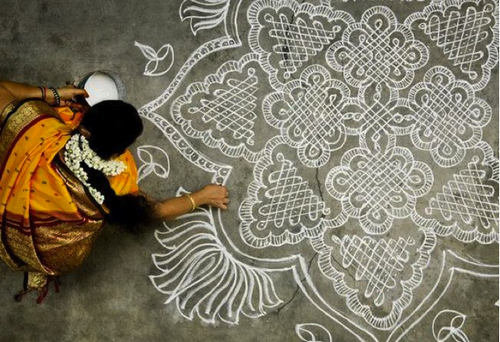 Some of my best childhood memories are of the time right after exams when I went to visit my grandparents. My sister and I were royally treated and completely spoiled: special food, treats, and delicacies; special toys; and plenty of pampering, love, and affection. My grandfather had done well and their home was a big house with a huge front yard.

Every morning, my grandmother would be up at dawn spraying a mixture of water and fresh cow dung on the front yard to repel insects and germs.  Next, she would draw the white Kolam or the Rangoli decoration with ground limestone. On festival days she would do the same, but use rice flour to discourage ants from take the food that had been made for the people. The idea was that the ants would get distracted and spend their time and energy moving tiny particles of rice flour instead of going after the sweets and delicacies that had been cooked for the people. It worked. The ants would nicely line up, tag team and move the rice particles all day one by one.  The entire day would be gone by the time they finished and the next day, a new Kolam would be in place for them to move.

Since we were kids, we often left crumbs and bits of sweets or pastries in our wake. After we went to bed, the ants would get to work. The next morning, we would see that a long line of ants had formed we had spilled. They would be working in a disciplined fashion to move t every single particle of the left over food to their homes. These ants always had the best discipline, working in perfect formation as a team, as a community. As humans, we can learn a lot from the ants about teamwork.

It reminded me of a Harvard case study I read in graduate school.  A coach, mandated with the job of creating a winning rowing team, created a golden team of experienced rowers to represent the school.  He also invited some less experienced athletes to be part of a second string team. He pitted the two teams against each other and was surprised that the B-team won the race. He had expected the experienced rowers, with their refined technical ability, better conditioning, and hours of practice would have the advantage.  These less experienced rowers, though, performed well as a team, while the A-Team did not work well together. The A-team complained about each other, disrupted each other’s work, and wouldn’t look to anyone for leadership. There was a lot of ego involved. The rowers from the experienced team started complaining about each other, while the rowers from the junior team said they needed to improve as a whole.

The coach asked all the players to support each other through emails. He found that the junior team supported each other, whereas the experienced rowers team continued to run each other down. In the next race, the junior team won again. The experienced rowers lost faith in themselves, and they abandoned their teammates. Each individual said that he felt like he was carrying the entire boat, while the others were slacking off. The wise coach had the members of the experienced team wrestle each other for 90 seconds each. They realized that they all had similar strength and capabilities. They switched opponents and wrested again with the same results. Soon, it had become a wrestling brawl—and the team, with a sense of contentedness, started flying on the water when the rowed. They had become a team. 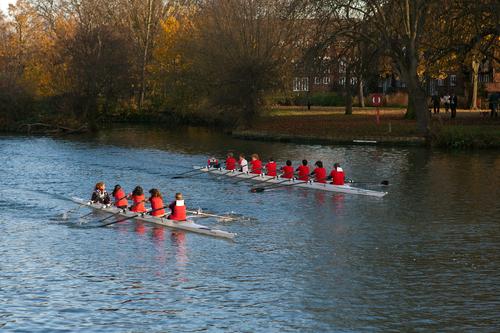 This example can be readily transferred to the business world. Show your vulnerable side to your team members and boss.  Show that you are a normal human being with emotions, aspirations, and difficulties. Let your guard down a little bit. Make time to go on team lunches, lunch with your boss and even lunch with your clients.  It forges bonds with others.  It lets you get beyond your role of manager, project manager, director, or vice president.  When you know people in this deeper way and they know you, then you can share and work well together.

It was a guiding principal for me during my consulting days. I hosted a team dinner, complete with client side representatives to kick off each new engagement. People got into deep conversations, shared pictures of their families, and got to know each other as human beings. It helped everyone understand that everyone was committed to doing a great job. It created an atmosphere that encouraged people to help each other, have each other’s back, and share resources and wisdom.

At another employer, although the employees were spread all over, we had face-to-face meetings where everyone gathered everyone in one place regularly. These meetings, which put us in the same room, helped us get things done. It was particularly critical when there were new members of the team.

Let me offer one more example of when I joined the team of a fast-growing supply chain software vendor. There were a lot of young, smart, energetic programmers that were hired from India who had great technical skills, but most of us didn’t have much domain knowledge about our current area of focus. We all loved the game of cricket and our technical director was both passionate and skilled at it. He began inviting us to play cricket every Saturday morning. It was like magic. During the games, we would share work challenges, tell stories about successes, or talk about their worries. It was much easier to have a healthy discussion outside of the hierarchy without the fear of getting penalized.

During this time, he saw that we were struggling with domain knowledge so he also arranged for weekly training for the entire technical team. When we started, it was humbling to realize what I didn’t know. However, over time, it got better. We had an open forum where we could ask questions and learn the complex system. Soon, it was clear that nobody knew everything but that each had expertise in some area. Our confidence grew and we enjoyed working together and we were able to solve technical, functional and business problems alike. We flourished. What practices have you have followed to build a great team? Let us know about your amazing teams in the comments section below.