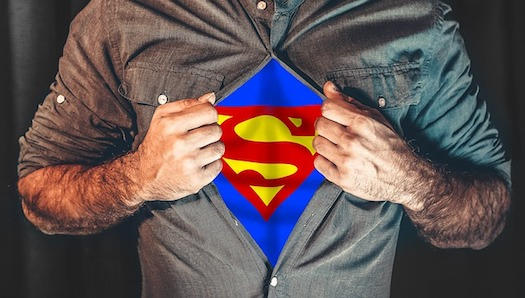 Think about all our familiar, modern superheroes: Superman, Spiderman, Batman, Ironman, and Wonder Woman. What differentiates them from others is, at least in part, a heroic attitude, let’s call it swagger.  All the movies that trace their exploits did an excellent job of taking us vicariously through their adventures, making us believe that just about anything was possible. They beat up the bad guys, catch the corrupt official red handed, and move seamlessly through the highest echelons of society.  The other key differentiator was the cool tech tools that let them back up their attitude. Iron man has his suit. Captain America and Wonder Woman sport a virtually indestructible high tech shield that protects from anything and everything, Dead-shot had his cool looking Augmented reality eyepiece, a signature trademark, to augment his already amazing marksman skills.

In our high-tech supply chains, product developers, engineers, and supply chain professionals engage in building the next generation of high tech devices. Too often, we focus on capabilities to the detriment of considering how it give the user superhero swagger.

If you think about it, part of the reason why people are buying these devices, is to look good. For example, Apple is the first smart watch maker to cash in on the idea that a watch is an emotional purchase and that people, particularly men, are likely to fall in love with shiny elegance.  Meanwhile, AR glass designs, such as Microsoft Holo lens, ODG Glass, and Recon heads up displays, remain clunky. It’s no wonder that Google Glass wearers were sometimes called the Glassholes. For these devices to get broader consumer adoption, they really need to add some swag to the wearer, make the wearer look cool and elegant.

Let’s look at an automotive example. TATA Motors in India launched a mini truck.  During their customer discovery process, it became clear that they needed a four-wheel design for the mini truck. A three-wheel design had a lot to recommended it, both working well and cutting expense. However, the potential customers, mostly young drivers, preferred a four-wheeler truck. Culturally, there was a perception that three wheels was less cool, too much like a simple auto rickshaw. It simply didn’t have the prestige that these young drivers wanted to impress potential spouses. A bride’s parents would happily get their daughter married to a driver that drove a truck with four wheels but not an auto rickshaw that had only three wheels.

So what are your thoughts on helping customer swagger with your products?  What designs make customers feel like a superhero when they wear or use your product? Let us know what you think in the comments section below.

Put Quality in the Supply Chain

The Startup Phenomenon: How 3PL’s Can Use it to Increase Value & Capture Market